from The Essense of Okinawan Karate-do
by Grandmaster Shoshin Nagamine 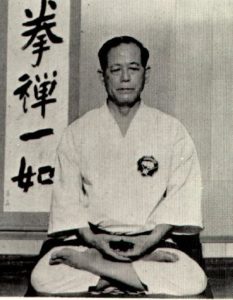 On 15 July 1907, I was born in Tomari-son, Naha City, of my father, Shoho and my mother Gozei. Though my physique was rather small, I was active and aggressive as any other healthy boys in my preschool days. Completing the compulsory education of primary school in March 1923, I entered Naha City-run 5-year Commercial School. However, when I was second-year student of the school, I suffered from a gastroenteric disorder and given a medication for some time. But, because of inefficacy of the medication, I had to resort to a diet, while practicing Karate at the backyard of neighbor friend, Mr. Chojin Kuba. It was in 1926 and I was 17 years of age.

Though the hard work both at school and training of Karate, I succeeded in recovering from illness, making me quite confident of good health. When I reached the senior year, I had a chance to participate, as a leader of Karate Club, in an annual martial arts of Kendo and Karate among various schools. In those days, I began, earnestly, work out every night at the ground of Tomari Primary School, under the guidance of old master, Mr. Kotatsu Iha.

After graduation in March, 1928, I started a full-scale practice, becoming the disciple of Mr. Taro Shimabokuro of Shuri City, who was senior of me by one year. It was my daily task to cover 8 km road between Shuri and Naha on foot to master the art of Karate. Thanks to the warmhearted encouragement of brother Taro, a hope was aroused in me, was enamored with the charm of martial art, and thus my appetite for Karate surpassed that of eating. Under the guidance of another Sensei, Ankichi Arakaki, I made further progress in the skills of Karate.

Recovery of health was complete then, I was 162 cm tall with marvelously developed physique. In 1928, I was examined for conscription, and passed it as class ‘A’ infantryman, and assigned to the 47th Infantry Division stationed in Oita Prefecture, Japan. In April of the same year, I was dispatched to skirmishes in Sainan, China, and in July next year, returned to Okinawa after an honorable discharge from the military service. Thinking about my future profession in which I may be able to utilize the skills of Karate, I decided it was policeman. And, in 1931, I was appointed a policeman of Okinawa Prefecture. The notion that I should scientifically study Okinawa Karate which, had never been systematically analyzed in the past, and the wishes for cultivating and training of body and mind could never get out of my mind.

During my first assignment days at Kadena Police Station, from December 1931 through August 1936, I was deeply influenced by direct guidance of most famous Sensei, Mr. Chotoku Kyan who became my second teacher. In April 1936, I was sent to the Tokyo Metropolitan Police Department, as a trainee policeman, and, during a six-month period I had a chance to receive some advice about peculiar Kumite movements from then celebrated master of Karate, Mr. Choki Motobu in Hongo ward, Tokyo. After returning to Okinawa, I continued to serve as a policeman of Okinawa Prefectural Police force.

On the recommendation of Sensei, Chojun Miyagi, founder of a different school called Goju-ryu, I was given a title of Renshi, in May 1940, from the Great Japan Botoku (Respect for the martial arts) Association at the Butoku Festival held in Kyoto, Japan. Realizing the existence of common essence between Kendo and Karate, I began practicing Kendo in 1938. After assiduous efforts made for some time, I was awarded a Sandan in Kendo in 1941, and had an opportunity to participate in the policemen’s martial arts contest among Kyukyu, Yamaguchi and Okinawa blocs which took place in Nagasaki Prefecture. In December 1941, I was dispatched, as a trainee, to Police University in Tokyo and, while I was there, given a chance to demonstrate the police-Karateman’s mysteries of Karate before a large audience of policemen of the Metropolitan Police Special Guard Division.

My duty as a chief of an Emergency Ration section of Naha Police Station during the World War II days put me under very dangerous situation in the fiercely fought battleground covering from Shuri to Shimajiri village in southern part of the island. But, hearing the news that defending Japanese Imperial Army Lieutenant General Ushijima committed suicide on June 22, 1945, I realized the absurdity of continuing fighting, so, with three fellow policemen in the same bunker surrendered to the U.S. Armed Forces.

While engaged in the transportation of casualties in Iraha village with other POWs, I happened to find on the road a book entitled “Introduction to Karate” by Sensei, Ginchin Funakoshi, by which I determined to lead a life of Karateman and find a hope to struggle against adversities. July 6, the same year, we the POWs were transferred from Iraha to Kocha, Ginoza village for the cultivation of the farm, while leading a life of refugees.

In the following December, I was appointed acting marshal of Taira Police Station and in May the next year, Awarded a position of marshal of Naha Police Office and moved there.

In July 1947, I was allocated a standardized house in Makishi ward, Naha City, and after settling down for a while, a temporary dojo was opened with the addition of wings to housing. The dojo was named Matsubayashi-ryu Kododan Karate and Ancient Martial Arts Study, where I began practicing and teaching Karate to youngsters. During the war, Okinawa was a scene of carnage between the U.S. and Japanese forces, eradicating distinctive culture, greenery of landscape, kind and admirable characteristics of people, and an often referred to as ‘the Land of Courtesy’ became the thing of the past. Young people lost their spiritual guidance and fell into decadence, public morals corrupt, moral decline caused an increase in the number of serious crimes.

A matter requiring immediate attention in such a situation was to implant in the minds of youngsters an indomitable spirit. Though I felt keenly the necessity of building an independent dojo where I may be able to mingle with the young, practicing together and sweating together, but its realization was a remote possibility where there was nothing but everything was reduced to ashes.

In the meantime, I was promoted to superintendent and chief of police at Motobu District Police Station in January, 1951, and was busy preparing for the All Ryukyu Judo Contest scheduled for October, gathering all the young but white-belt policemen. Main purpose in the training was to make progress in judo skills, but they were to work out in Karate also. Participants in the contest were from such a large police stations as Maehara, Koza, Shuri and Naha, all of these some 200-strong organizations, while our Motubu team had only 60 men, out of which 8 white belts took part in the competition.

Nonetheless, our team won the victory, beating all the 13 participating stations. It was really a fruitful effort after so much workouts and training. Our hard was finally paid off when all the members of our team, including me, were promoted to black belts. When I decided to quit after serving as superintendent for a year, however, fellow policemen begged me to stay in my position. But, my strong determination to follow a Karateman’s life tore myself from my policemen-friends with a bleeding heart.

In January 1953, I managed to build a long-cherished and full-scale Karate dojo for the first time in Naha and restarted, hanging up a shingle as “Matsubayashi-ryu Karate Kodokan”. In the following December, I ran for election to the Naha City municipal assemblymen and served for three terms and recommended for vice chairman. I resigned the post in 1957. After that I had my dark days following the failure in business twice, but even at the nadir of my fortune, continued the practice of Karate.

From time to time, I had vague feeling of anxiety in tackling with Karate and my way of living. Just then, in 1963, I had a chance to read “Gorinsho” (Book of Five Wheels) written by Miyamoto Musashi, and was much moved. Already I had read through a book titled “Teshhukoji-no-shinmenboku” (Buddhist layman and master swordman, Teshhu’s true self). Luckily I was given a hint in going ahead of my way as a Karateman through the reading. The two were unrivaled swordmen in all ages, had common in intelligence, bravery and physical power, embraced the Buddhist faith so as to have an unbending spirit, practiced Zen meditation for art of war, and devoted whole heart to the spiritual problems. These pioneers of martial arts opened my eyes to re-orient my physically bent Karate to the togetherness of Fists and Zen. So I was resolved to adopt Zen meditation as part of Karate practice ever since.

As famous Zen Buddhist, Dogen once said, “Accomplish what you cherish in your mind”, I became, by a happy chance, disciple of Zen priest, Sogen Sakiyama of Enkakuji in October and began Zen meditation course within the dojo. As the priest went to the U.S. for preaching, I begged teachings from Keisho Okamoto, another priest of Rengein of Itoman, and furthermore from Shuzen Kise, priest of Jushoin of Chatan for Zen practice.

Four classes of Karate are held daily in my dojo, during each class, a 15-minute Zazen (Zen meditation) is given for the strengthening of minds and instilling philosophy of meaningless of surprise attack and, not the defense but true sense of victory without fighting. Under the conviction that togetherness of Zen and Karate is the one and only way to master the real way of Karate, and hoping that many a young Karate experts be nurtured, I am enjoying Karateman’s life, with the spirit of wholeheartedness of health and longevity.