From March 19th to the 29th I had the tremendous joy of training in and around Naha, Okinawa— a trip that not only revealed to me untold new understandings of fundamental kihon, kata, bunkai, and yakusoku kumite, but also brought to life karate history and culture in a fascinating and most unexpected way.

Over the course of 10 days I had the immense honor to partake in 18 trainings sessions with six different high-ranking senseis at their respective dojos. On the very evening I arrived on the island, after my flight from NYC through Shanghai, I began my training at the dojo of Tetsuo Makishi, Renshi, 6th dan. We worked on basic kihon elements and focused primarily on the Pinan katas. The work was intense and highly precise – a harbinger of things to come!

Throughout the next nine days I trained multiple times with Senseis Tsugio Miyagi, Kyoshi, 8th Dan; Masao Shinzato, Kyoshi, 8th Dan; Iwao Tome, Hanshi, 9th Dan; Toshimitsu Arakaki, Hanshi, 10th Dan; and WMKA President Yoshitaka Taira, Hanshi, 10th Dan. Minor corrections, major rediscovery and completely new understandings followed for all 18 kata, yakusoku kumite and bunkai oyo and even some kobudo! If the intense work in the dojos itself wasn’t enough to make my head (and body) swim — keeping track of all this new-found knowledge through copious notes kept me busy for hours after each session.

In between these classes, I was lucky enough to be guided by my friend Becka Tedder from the Dojo Bar who took me sightseeing by foot and by car to hidden karate-history treasures: monuments in honor of so many of the karate legends including Gichin Funakoshi, Chotoku Kyan, Sokon Matsumura and Kosaku Matsumora. Some of these markers were hidden in plain sight, but many were in remote locations. In one case, Becka took me all the way to the northern part of the island where, near Nago, down multiple unmarked roads, up a mountain, past a ginger farm, and actually hidden by giant leaves: Kosaku Matsumora’s hiding place was revealed, marked by a beautiful engraved stone.

Though this was my second trip to Okinawa it was certainly the realization of a dream. The honor and overwhelming opportunity to learn from these knowledgeable, kind and awe-inspiring karateka left me humbled and determined to keep returning on a yearly basis to continue on my path in Matsubayashi-ryu. 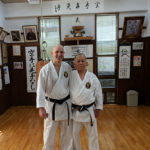 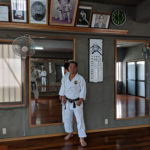 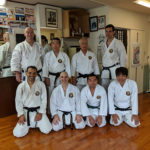 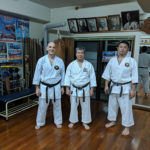 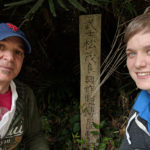 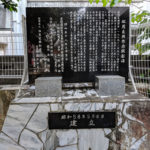 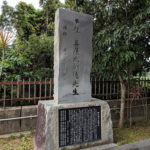